Jersey’s Chief Minister has rejected a call from the Jersey Consumer Council to help Islanders through the current cost of living emergency.

The JCC took the unusual step to write to Senator John Le Fondré on 18 March, to ask him and his Government ministers to consider a package of measures which could help ease the financial pressures being put on consumers following a combination of Brexit, the economic recovery from Covid and the Russian invasion of Ukraine.

The five key measures the Council requested for a three month period were:

Thank you for your letter, dated Friday, 18 March, relaying the suggestions of the Jersey Consumer Council (JCC). I apologise for the significant delay in replying to you.

The Government of Jersey is fully aware of the inflationary pressures facing all Islanders and has implemented support measures which were announced at the last States sitting by the Social Security Minister. Any measures adopted by the Government need to be targeted to achieve the maximum assistance to those most vulnerable to the effects of inflation.

The current inflationary pressure has largely arisen as a result of global factors that are beyond Jersey's control. However, in addition to the measures already taken, Ministers continue to consider further practical initiatives that can be taken where appropriate in the short and medium term to alleviate the impact of inflationary pressures will have on Islanders. These will be ready for presentation to the next Council of Ministers following the elections in June.

I have set out below detailed responses to each of the suggestions raised by the Consumer Council.

Whilst on a cursory basis this might appear attractive there are a number of concerns over this suggestion.

Reducing fuel duty is not an effective means of delivering help to Islanders. It does not benefit all households equally. Average mileage and fuel consumption in Jersey is significantly lower than in the UK. In addition, households on lower incomes - who have lower rates of car ownership - make up only a small percentage of motor fuel spending. A reduction in fuel duty would therefore disproportionately benefit those households with higher incomes and more vehicles, with some of those least well off receiving no benefit at all.

The Jersey Consumer Council's PriceComparison.je website on 21 March showed the cheapest litre of unleaded petrol in Jersey was 149.9p (in St Saviour) while the most expensive was 167.9p (in St Helier) - a difference of 18 pence. For diesel, the cheapest litre is to be had in St Helier at 153.0p in St Helier and the most expensive litre can also be had in St Helier for 173.9p - a difference of 20.9 pence, which is far greater than the reduction of 9p per litre which is proposed by the JCC. Islanders therefore already have the ability to achieve far greater savings than a reduction of 9p would achieve by being selective in where they purchase their motor fuel.

It should also be remembered that the States Assembly has declared a Climate Emergency and that we should be doing everything possible to encourage the use of public transport and other more climate friendly modes of transport at this time, many of which offer better value to islanders. The component of fuel duty hypothecated to the Climate Emergency Fund is essential in delivering on the commitments identified in the Carbon Neutral Roadmap that is due to go before the States in April.

A 9-pence reduction in fuel duty would reduce Government income by a little over £4 million per annum. The Carbon Neutral Roadmap proposes a suite of policies that seek to reduce Jersey's reliance on fossil fuels over the long term for reasons of sustainability (carbon reduction) but also to increase the affordability and security of our energy supplies. By reducing resources to deliver these policies, Jersey will remain exposed for longer to energy market supply issues and the geopolitical tensions associated with fossil fuel production that we are seeing causing the current market volatility and associated impacts.

Finally, in relation to a reduction in fuel duty it would also be important to have some degree of confidence that such a reduction would be passed on in full to consumers and I note that this concern is also being expressed in the United Kingdom.

It is important that any measures agreed by Ministers provides support in a way that is targeted to where it is most needed and can be of the most assistance. For this reason, a £100 credit to all households is not being actively considered. However Ministers have agreed a temporary scheme to support those most vulnerable. The Minister for Social Security has announced plans for monthly payments to support those most vulnerable in our community. This will take the form of a direct monthly payment of £20 to every adult or child in a household claiming Income Support and every pensioner claiming a means tested benefit.

This scheme will run from April to December 2022 and will benefit approximately 11,450 individuals. An eligible household of four will therefore receive £80 per month for nine months which is clearly more beneficial than a single payment of £100. Payments will be sent automatically - there will be no need for people to apply. These payments will also go to everyone receiving the Community Costs Bonus (CCB). Officers will also be exploring options for longer term support which will be considered by the new Council of Ministers following the election in June.

Commit to not reducing the online shopping threshold before 1 January

I can confirm that this is already the case and that the GST De Minimis Level will not be reduced (from £135 to £60) until mandatory registration of larger offshore retailers commences. As identified in the Law [Finance (2022 Budget) Law], which was approved by the States Assembly at the end of last year, the reduction in the GST De Minimis Level will not come into force until 1st January 2023.

Whilst theoretically attractive, experience and evidence does suggest that these proposals can result in unintended consequences which would not achieve the desired outcome. Previous surveys indicate that Jersey consumers value the convenience of a location above the price of parking when choosing where to shop. Indeed, the percentage of respondents who considered the price of parking to be a factor was less than 10%.

It should be recognised that free parking could therefore work contrary to its intended result. As it removes the price incentive to walk, cycle or use the bus for town workers, this could generate additional demand for parking spaces making it harder to find a parking space which in turn may put people off shopping in the town.

Regarding free bus journeys, the most recent Household Spending survey found that bus fares averaged less than 0.2% of total expenditure - and that actually it was higher earners that spend more on public transport than lower earners.

The Government has reconstituted the Inflation Strategy Group to monitor changes and recommend any steps the Government can take to assist Islanders. This group has already met and is supported by the Chief Economic Advisor and Chief Statistician, and other specialist officers.

Current forecasts are for further changes in inflation over the course of the next year and the Government will aim to target any supportive measures to assist Islanders who are most vulnerable That is why we have put in place more than £2 million worth of assistance for those most affected by the current inflationary pressures, and which are taking affect during the course of this month.

I hope the above clearly addresses each of the points raised by the Consumer Council in your letter and provides the Council with confidence that the Government of Jersey is taking this matter seriously.

Consumer Council Chairman Carl Walker responded by saying: "We are very disappointed with the response from the Chief Minister and his team, and it is clear that the Government of Jersey believes it is already doing enough to help Islanders through these extremely difficult times.

"The Council has tried its best to prompt the Government to act beyond the £4.62 a week it has promised to those already on benefits, and will now concentrate on developing other work streams which may help consumers cope with this cost of living emergency.”

Islanders are welcome to share their thoughts on the JCC’s social media accounts or by emailing contact@consumercouncil.je 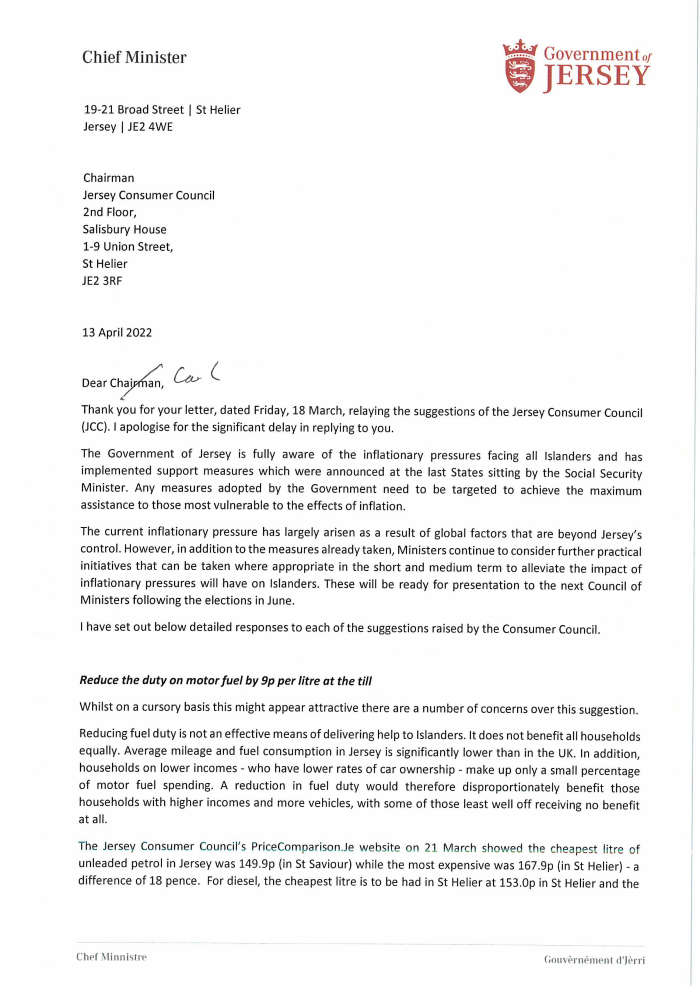 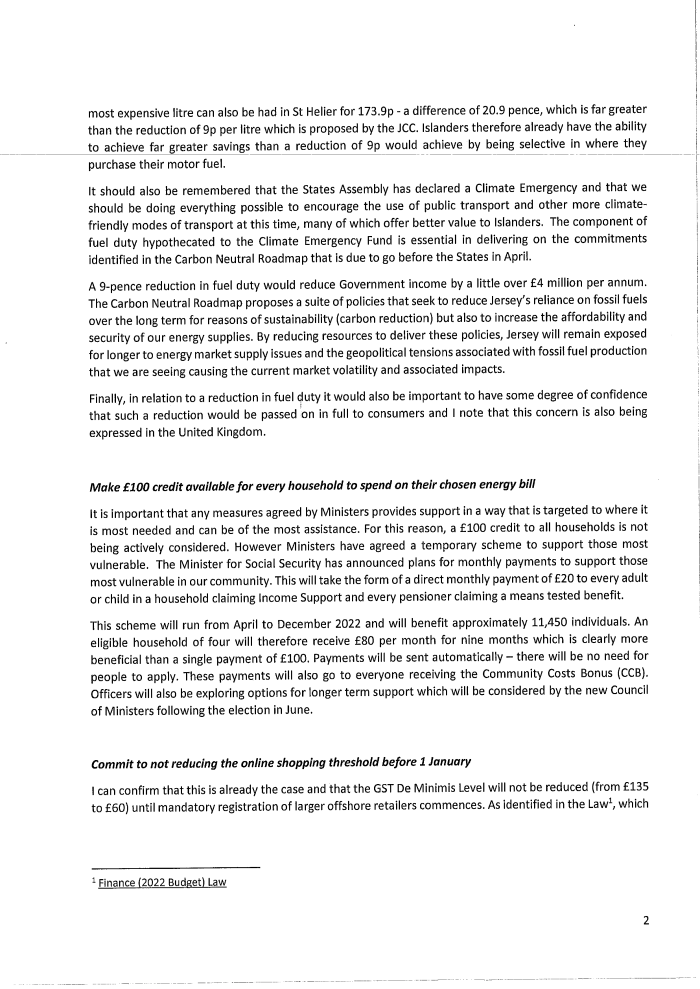 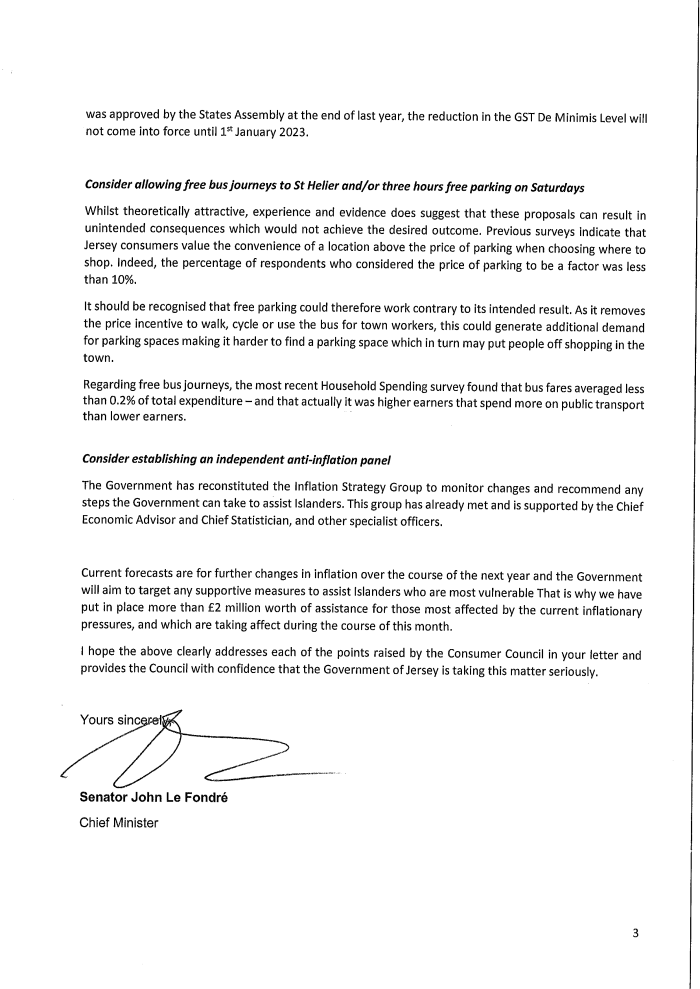