The Jersey Consumer Council has been monitoring fuel prices since 2007 (see below table).

As the below graph highlights, fuel prices have increased steeply since the start of 2021. 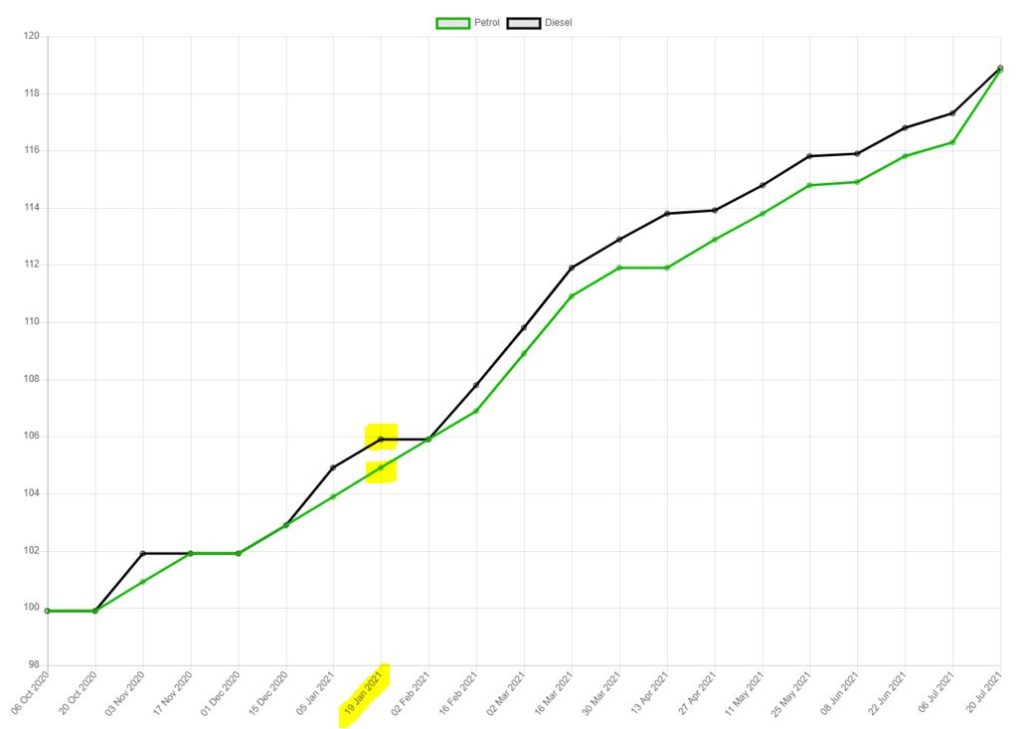 We approached each of the Islands’ fuel suppliers for comment and, similar to the investigation we did last year on Jersey versus UK prices, it appears that multiple global impacts are causing the increase.

“We’ve seen the wholesale fuel market increase by around 6ppl in the last few months, this has been mainly due to the global rebound in demand for fuel, as COVID restrictions have been easing. These are all global influences which have an impact on our supply chain”.

“Oil prices have been reeling ever since Saudi Arabia and the United Arab Emirates (UAE) reached a compromise that resolved a two-week-long standoff over production levels. Under the compromise, the UAE will see its baseline production level lifted to 3.65 million from the current baseline around 3.17 million bpd (barrels per day) when the current contract expires in April 2022. Crude oil’s year-long surge has been sputtering for most of the last two weeks with the prospect of new supply undermining the case for producers to increase prices. The Organization of the Petroleum Exporting Countries and their allies, known as OPEC+, reached a compromise last Sunday to increase oil supply from August to will lower prices which, hit their highest level this month in more than two years”.

“Oil prices have been on a yearlong surge, as demand has increased as a result of the relaxations in global lockdowns. What will happen in the short term is anybody’s guess, rising COVID-19 infections in many countries may threaten demand, although major banks have steadfastly argued that the market will continue to rally, with Goldman Sachs reiterating on Monday that it sees more upside in the market. The Organization of the Petroleum Exporting Countries and their allies, known as OPEC+, reached a compromise on [18 July] to increase oil supply from August to cool prices, which had hit their highest level this month in more than two years”.

We will continue to monitor fuel prices sold at all Island forecourts and the cost of heating oil. Prices are published on our pricecomparison.je website and free downloadable app.